In an analysis of four of the most iconic river basins in the West, the authors of a recent study advised that:

Nineteenth-century water law, twentieth-century infrastructure, and twenty-first-century population growth and climate change are on a collision course throughout the West. The sooner and more comprehensively we can address the historical water difficulties that define the region, the more likely we will be able to meet and accommodate the new challenges that climate change will bring.1

The collision course described is nowhere more evident than on the Rio Grande. The authors concluded—despite considering the dire state of the Colorado, Klamath, and Sacramento-San Joaquin Bay Delta systems—that the Rio Grande offered "the best example of how climate-change induced flow declines might sink an admittedly smaller, multistate, water system into permanent drought."2

The authors concluded... that the Rio Grande offered "the best example of how climate-change induced flow declines might sink an admittedly smaller, multistate, water system into permanent drought." 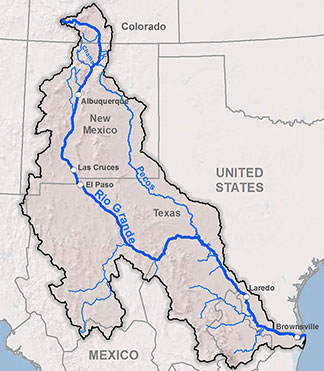 The Rio Grande is the third-longest river in the United States, flowing 1,900 miles from its headwaters in the San Juan Mountains of Colorado to the Gulf of Mexico. Along its course it bisects New Mexico and forms the international border between Texas and Mexico.

The Rio Grande was historically characterized by its extreme and highly dynamic flows, which varied by an order of magnitude "from less than 100,000 acre-feet up to well over 1,000,000 acre-feet."3

These dynamic conditions shaped the habitat and behavior of a diverse array of native fish, wildlife, and plants that inhabited the river and riparian corridor for centuries. Prehistoric fish species, such as the shovelnose sturgeon and American eel, inhabited the waters of the Rio Grande from the Gulf of Mexico to northern New Mexico.

The river served as the lifeblood of the arid Southwest, but its dynamic character challenged human communities that sought to reside along its banks. Pueblos thrived for centuries before the Spanish settled the area, farming the rich fertile soil along the river and in its vast floodplain. The Pueblos worked with the natural flooding and meandering of the river, taking advantage of all it had to offer, as evident by the eighteen Pueblos still clustered along the Rio Grande from Taos to just north of Socorro. However, as Spanish and other European settlers began to inhabit the Rio Grande Valley in the 1600s, this harmony between the mighty river and human communities began to fracture. The river became largely viewed by those new settlers as simply another "resource" to be exploited, and the modern problems that plague the river were born.