The challenges facing the Rio Grande are great. To move beyond the archaic system of water allocation, the outdated and excessive infrastructure, and the anticipated flow reductions due to our warming climate, we need not only a bold vision but also a willingness to make significant legal and institutional changes. One opportunity—to move beyond the status quo and address the evaporation losses that are creating a significant drain on the Rio Grande system—is to evaluate moving water storage from low- to high-elevation reservoirs28 to conserve water.

The 2000 Middle Rio Grande Water Supply Study first identified the stress of evaporation losses from Elephant Butte Reservoir and recommended a further assessment of the costs and benefits of continuing to store water there.29  The Water Acquisition and Management Subcommittee (WAMS) built on this study by preparing a report for the Middle Rio Grande Endangered Species Collaborative Program in 2005. The report emphasized that "evaluating water saving potentials under alternative reservoir operation scenarios during wet and dry water years using realistic allocations of water storage volumes and surface areas" is a high priority and set the objective for its study "to define appropriate water operation alternatives to minimize reservoir evaporation losses and to maximize the conservation of water available to meet Program goals."30

Based on these goals, the subcommittee produced a short background paper evaluating the reservoir free-water surface evaporation rates for the seven Rio Grande reservoirs (Heron, El Vado, Abiquiu, Cochiti, Jemez Canyon, Elephant Butte, and Caballo).31 The following Table 1, reproduced from the WAMS study, represents the maximum evaporation losses from these reservoirs and shows the disproportionate amount of water evaporating from the low-elevation reservoirs compared to their counterparts upstream.

Based on the drastic difference between high- and low-elevation reservoir evaporation, the WAMS report ultimately concluded that "significant savings of water could be possible if greater proportions of New Mexico’s Rio Grande water were stored upstream of Elephant Butte Reservoir at locations of increased elevation."

The estimated annual evaporation losses by reservoir (as reported in the WAMS study) are represented in Figure 10. 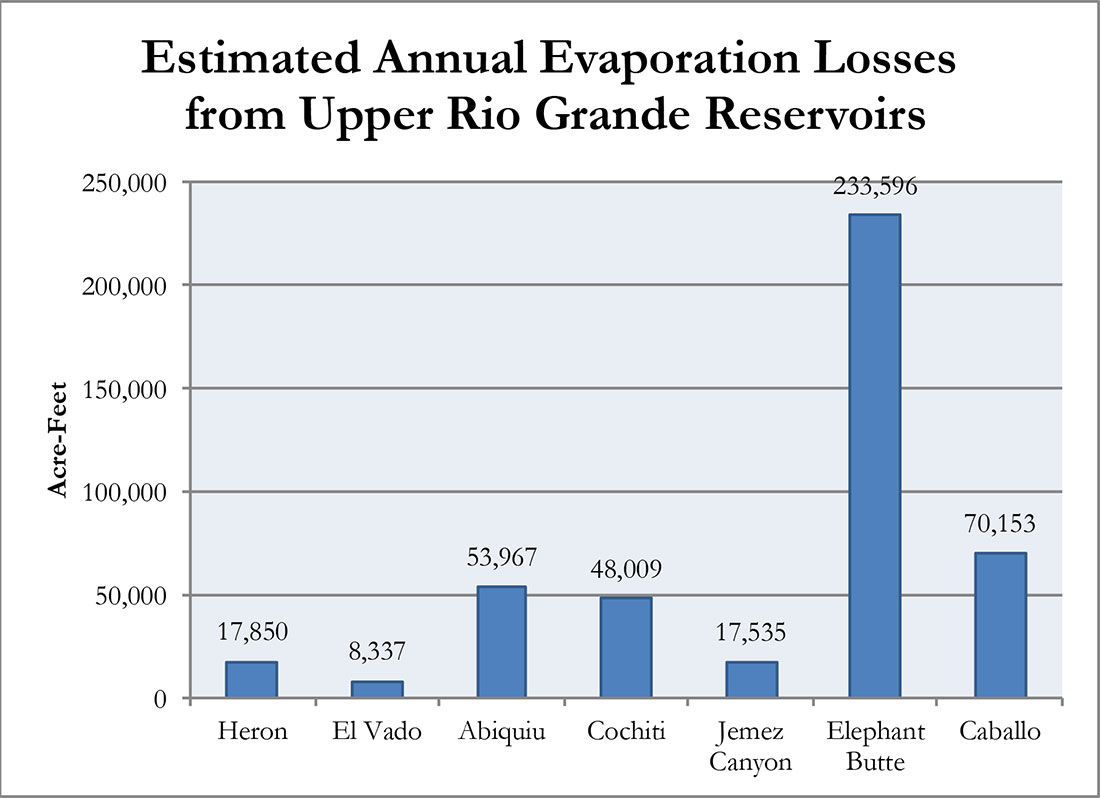 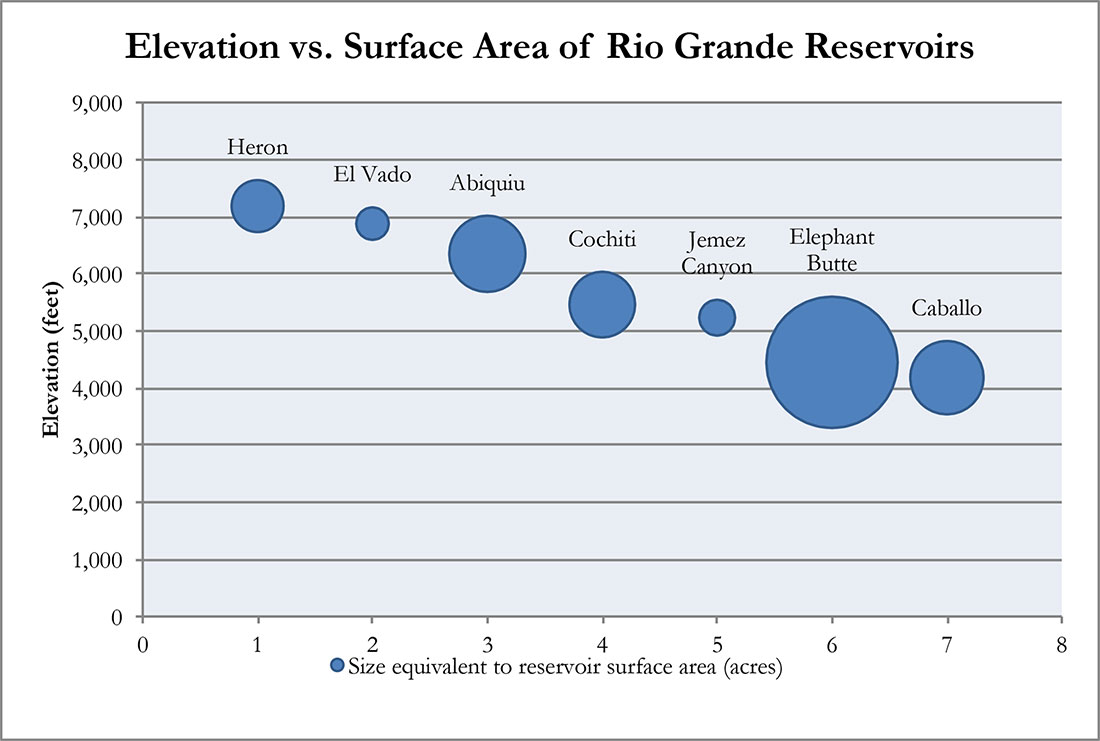 The size of each circle represents the relative surface area of that reservoir and the height of each circle shows its elevation. There is a 3,000-foot difference between the highest elevation reservoir (Heron) at 7,186 feet and the lowest elevation reservoir (Caballo) at 4,182 feet. Even more stark is the contrast between the reservoir with the smallest surface area (El Vado) at 2,452 acres and the largest (Elephant Butte) at 35,984 acres.

Despite the fact that nearly five million acre-feet of storage is divided almost equally between high-elevation (2,470,065 acre-feet) and low-elevation (2,350,070 acre-feet) reservoirs, the distribution of evaporative losses is not. The large, low-elevation reservoirs (Elephant Butte and Caballo)—which average 4,316 feet in elevation—make up over 68 percent (303,749 acre-feet) of the evaporation losses in the Rio Grande Basin in New Mexico. The other five reservoirs (Heron, El Vado, Abiquiu, Cochiti, Jemez Canyon)—which average 6,222 feet in elevation—account for 32 percent (145,698 acre-feet) of evaporation losses.

Figure 12. Comparison of evaporation losses between high- and low-elevation reservoirs. 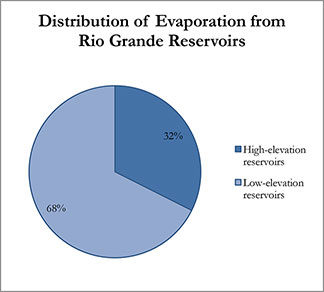 Based on the drastic difference between high- and low-elevation reservoir evaporation, the WAMS report ultimately concluded that "[s]ignificant savings of water could be possible if greater proportions of New Mexico’s Rio Grande water were stored upstream of Elephant Butte Reservoir at locations of increased elevation."33 Importantly, the subcommittee recommended that "[t]he information here should be further developed through a subsequent study to evaluate water saving potentials under alternative reservoir operation scenarios using realistic allocations of water storage volumes and surface areas among these reservoirs for a selection of wet to dry years."34 Despite these calls for a comprehensive study and modeling of evaporation for these seven reservoirs, stakeholders have made no progress over the past decade in evaluating alternative storage scenarios. Instead they have actually thwarted the development of this solution, based on their own unwillingness to veer from the status quo.35

The need for such a study is only getting more urgent based upon conditions in the Basin. Over the past decade, flows in the Rio Grande have been below average in eight years. From 2011 to 2014, the flow forecasts were below 50 percent of average—reaching a low of 23 percent in 2013—and only returning to hover around 50 percent during the past two years. Further, years when reservoir storage is not at capacity provide an opportunity to move storage upstream to fill unused reservoir space with little threat of limiting future storage.

The effects of climate change will only grow more severe in the coming decades. Reclamation found in its 2016 SECURE Water Report that evaporation from Elephant Butte "is projected to increase by up to 10 percent."36 This forecast should place a renewed urgency on completing an independent, comprehensive study that models evaporation from these seven reservoirs and that provides recommendations for a new, integrated approach to reservoir management for the 21st century.