By the 1800s, those newcomers settling the valley began to siphon the seemingly endless waters of the Rio Grande to sustain mining, livestock grazing, and irrigation.6 Based on the developing state law around mining at that time, the system of prior appropriation was established for allocating water. Generally, the doctrine creates private rights in the public water resource when an individual puts water to a "beneficial use." The oldest or "senior" right established is the highest priority right on that river and will receive water before any other "junior" rights established later in time. While each state developed its own nuanced system, the law is simple and rigid and does not provide much, if any, flexibility.

The strict doctrine has several key flaws. First, it does not provide any rights to ensure that river ecosystems have enough water to properly function or that rivers are not sucked completely dry. Second, without this critical precaution in the law, the system of allocation awards far more "rights" to water than the river system can support in any given year. For example, in California’s San Joaquin River, "people have rights to nearly nine times more water than flows down from the [mountains]."7 Thus, the law is designed to over-promise water to more uses than a river can possibly deliver, based on the assumption that the states will police the rights according to the long line of users based on the priority of the right and the water available. As more people got in line and supplies began to be stretched beyond their limits, this flawed system resulted in the destruction of the natural flows in our rivers and the adjacent riparian ecosystems. The final defect of the system is that rivers do not heed arbitrary political boundaries and often cross several states before reaching the ocean. This makes it difficult for one state to administer the priorities without harming downstream users in another state.

In the late 1880s, these problems began to play out for the Rio Grande in the form of severe water shortages in New Mexico, Texas, and Mexico due to the booming irrigation in Colorado's San Luis Valley. However, the system of prior appropriation provided no mechanism for ensuring that upstream states did not take all the water from their neighbors to the south. The problem was so severe that the federal government was forced to intervene. In 1896, the Secretary of the Interior placed an embargo on all water development in the Rio Grande Basin until a comprehensive solution could be fashioned. However, the solution to address the problems of the 19th century became measures well outside the system of prior appropriation. These measures involved the negotiation of an interstate water compact (the interstate "law of the river") to allocate the Rio Grande’s water among Colorado, New Mexico, and Texas; the signing of the 1906 treaty clarifying the United States’ obligation to deliver a certain amount of water to Mexico each year; and the beginning of the plan to construct the first major dam and reservoir on the Rio Grande.

By the early 1900s, the Rio Grande's waters were already over-promised, as was much of the surface water throughout the West. The strategy for dealing with this was not finding ways to live within our means by reducing consumption or conserving water, but instead the plan was to pour concrete and reengineer our rivers.

By the early 1900s, the Rio Grande’s waters were already over-promised, as was much of the surface water throughout the West. The strategy for dealing with this water scarcity was not finding ways to live within our means by reducing or conserving water or limiting human communities to areas where water was available. Instead, the plan was to pour concrete and reengineer our rivers to further stretch water supplies to irrigate farms in the desert and prevent the natural flooding of the river. Congress ushered in this new era of water development with the passage of the Reclamation Act of 19028 and the Flood Control Acts of 1948, 1950, and 1960.9 These acts authorized and funded the construction of irrigation infrastructure across the West as well as dams and levees to provide flood and sediment control.

Elephant Butte Reservoir was the first large reservoir constructed on the Rio Grande at the turn of the century. The reservoir was part of one of the first federally funded, large-scale water development projects in the West (the Rio Grande Project). At the dam’s declaration on Oct. 19, 1916, the director of the Reclamation Service (now the U.S. Bureau of Reclamation) explained the variability in flows of the Rio Grande and the susceptibility of the Basin to a series of dry years followed by several wet years and justified the need for Elephant Butte Reservoir10 as follows:

[T]he full utilization of this water supply could not be obtained without a reservoir of immense dimensions—one large enough, first, to hold the waters of those great years when 2,000,000 acre-feet were discharged, and to provide for evaporation and hold that water here until a dry year should come. Then, in addition to the great capacity necessary for that purpose, it would be necessary to provide for the entire time storage of the large amount of sediment that passes down the river.

This attitude dominated the 20th century of water development on the Rio Grande and sparked the construction of massive infrastructure that led to the draining of this iconic river.

From 1916 to 1975, the federal government embarked upon the construction and rehabilitation of more than 20 additional dams and reservoirs along the Rio Grande and its tributaries. Eight of these dams—those located in the middle Rio Grande (Heron, El Vado, Abiquiu, Cochiti, Jemez Canyon, Galisteo, Elephant Butte, and Caballo reservoirs)—created five million acre-feet of storage in the Rio Grande system.

Figure 4. Distribution of available storage in the Rio Grande Basin in New Mexico.

This additional infrastructure was not without its consequences. First, by significantly changing the timing and amount of water flows in the Rio Grande, the dams and reservoirs destroyed the dynamic flows that had characterized the river system and segmented aquatic habitat of native species of fish and wildlife. Dams also trapped "significant amounts of sediment," changing the structure of the river and the availability of aquatic and riparian habitat.11 These fundamental changes to the river inhibited native species from carrying out basic life functions (such as breeding, feeding, and finding shelter) and resulted in the extirpation or extinction of a total of seven native fish species, including the Rio Grande bluntnose shiner and shovelnose sturgeon. Many additional plants and animals were pushed to the brink of extinction, including the Rio Grande silvery minnow, Southwestern willow flycatcher, yellow-billed cuckoo, New Mexico meadow jumping mouse, and Pecos sunflower, among others. Further, these same reservoirs are responsible for adding methane emissions into the atmosphere that are fueling climate change.12

In addition to these impacts, one of the most significant effects of damming the Rio Grande and its tributaries is the considerable increase in open water evaporation in the Basin. This became apparent from the S.S. Papadopulos & Associates, Inc. study prepared in 2000 that evaluated the water supply and demand in the 175-mile reach of the Rio Grande from Cochiti Reservoir to Elephant Butte Reservoir. That study also developed a water budget and examined whether New Mexico could meet its delivery obligations to Texas under the Rio Grande Compact in the future.13 The study found that reservoir evaporation makes up about 20 percent of the mean depletions in the river system and is highly variable.14 Based on these significant changes in the volume and associated surface area, evaporation from the reservoir can range from 10 percent to 30 percent of the overall Basin depletions.

Elephant Butte Reservoir is largely responsible for this variation due to its incredible fluctuations in storage and associated surface area.

Figure 5. Reservoir storage in Elephant Butte Reservoir for the past 100 years.15 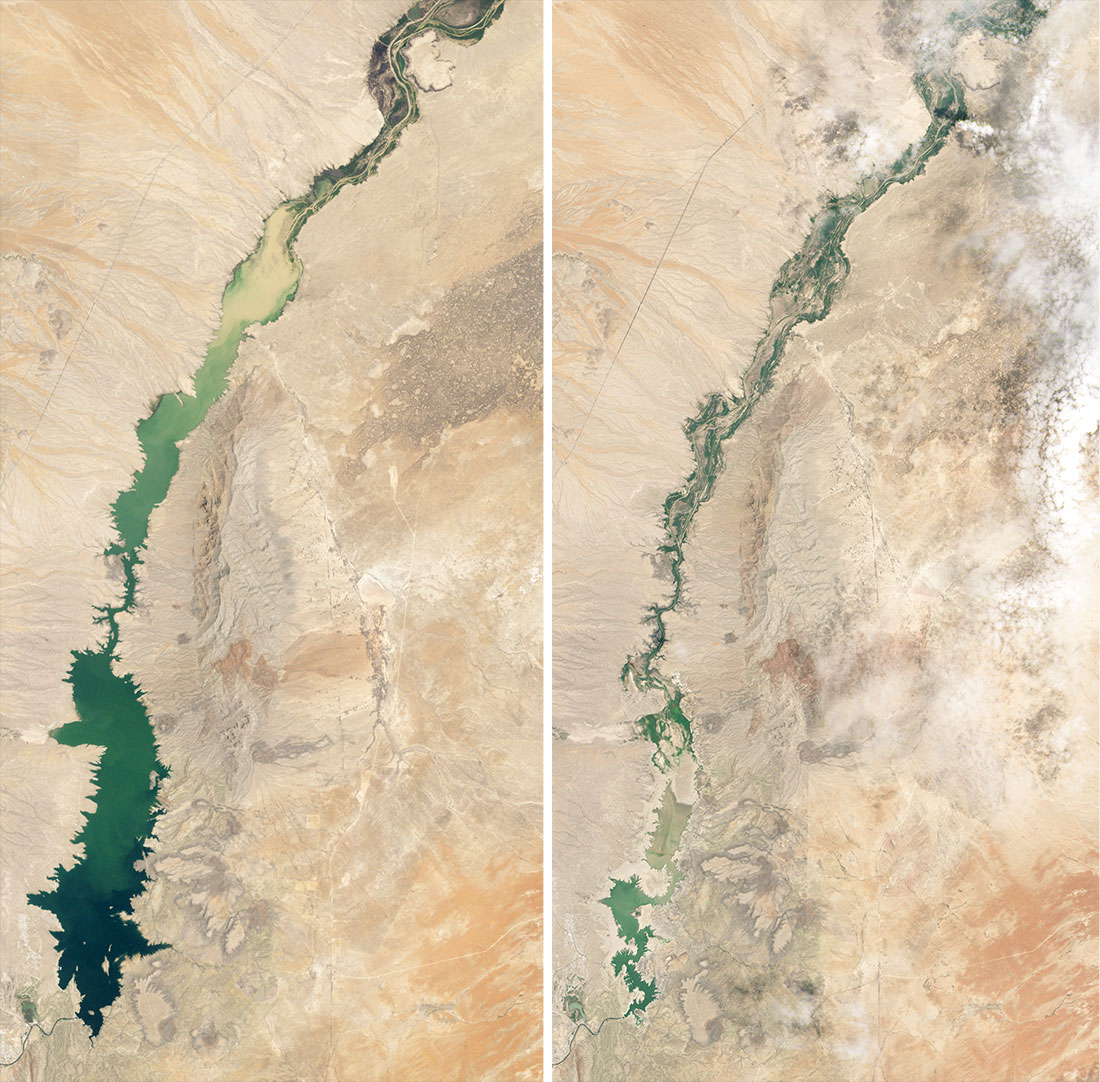 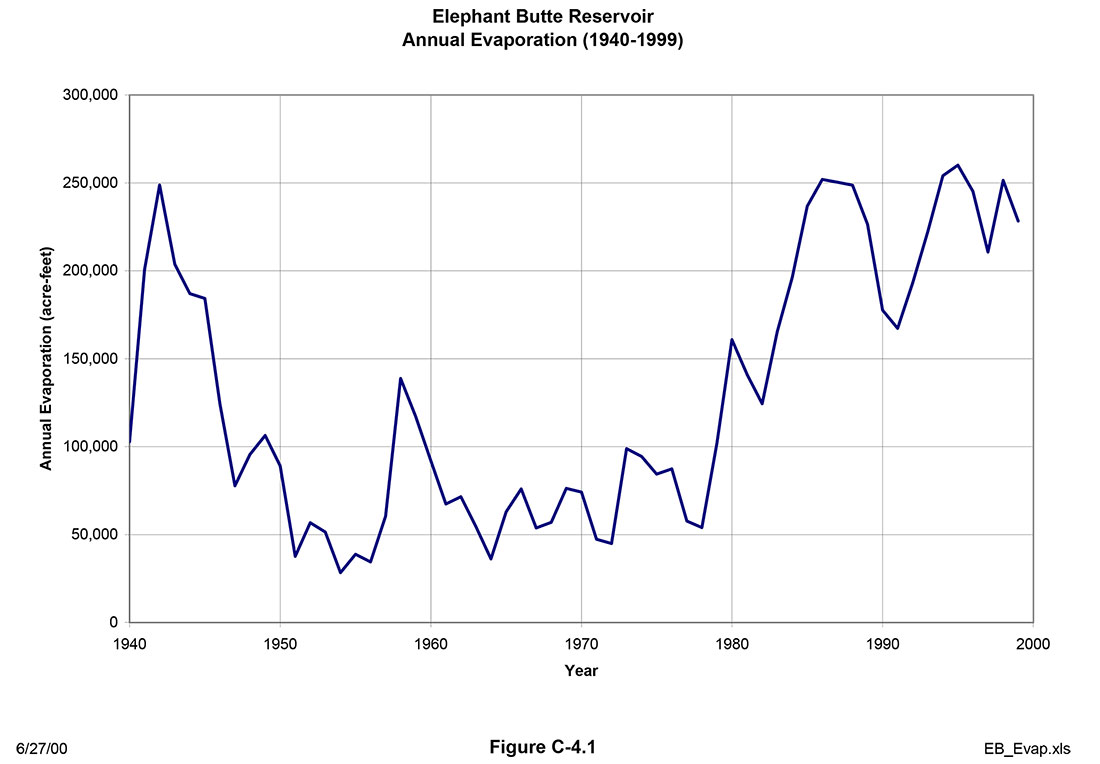 The unique problem of Elephant Butte Reservoir—beyond its size and location in a very arid region of New Mexico—is that evaporation "increases at a greater rate than incremental storage."19 Thus, as the reservoir holds more water, the amount of water that evaporates dramatically increases. This is a significant factor in determining the future utility of this reservoir, given the challenges of climate change in the 21st century.

In addition to the already significant challenges facing the Rio Grande prior to the 21st century, this century compounds those burdens with the pressures of population growth, increasing consumption, and climate change. The Rio Grande currently supplies water to municipal and irrigation uses for more than six million people and two million acres of land in the United States and Mexico.20 Earlier this year, Reclamation concluded that "[t]he river’s flows are often insufficient to meet the basin’s water demands" and that "[t]he magnitude and frequency of water supply shortages within the Rio Grande Basin are severe, even without the effects of climate change."21

The stress placed on the Rio Grande is felt most acutely in its river ecosystems. The warning signs of this problem are river drying and the inability of native species of fish and wildlife to survive given the current challenging conditions. The drying of the Rio Grande in the middle valley in central New Mexico now occurs annually due to water mismanagement in the region. This drying, when combined with segmentation of habitat caused by gigantic flood control dams, like Cochiti Dam, has led to a significant decline of native species of plants and animals. In 2003, seventy miles of the river dried. Such annual drying is detrimental to the native fish and wildlife and has resulted in a huge uptick in listing of endangered and threatened species on the Rio Grande since the mid-1990s, including the Rio Grande silvery minnow, Southwestern willow flycatcher, Pecos sunflower, yellow-billed cuckoo, and New Mexico meadow jumping mouse, among others.

As the climate warms, these stresses on riverine and riparian environments will become even more pronounced. The West-Wide Climate Risk Assessment for the Upper Rio Grande Basin, conducted by Reclamation in 2013, found that average annual temperatures in the Basin increased by 2.5 degrees Fahrenheit (ºF) from 1971 to 2012 (0.7ºF per decade), a rate nearly double the global rate of temperature rise.22 "The greatest temperature increases were measured at sites in the Middle Rio Grande" with an increase of 0.88ºF per decade from 1971 to 2012.23

Reclamation’s 2013 study also predicted that future mean annual temperatures in the Upper Rio Grande Basin would increase by an additional 5ºF to 7ºF and precipitation would gradually decrease by the end of this century.24 As a result, flows in the Rio Grande are projected to decrease by an average of one-third.25

These flow reductions, however, will not be distributed evenly throughout the Basin. The climate assessment predicts that by 2100 flows in the Rio Grande will decline in Colorado by 25 percent, in central New Mexico by 35 percent, and in southern New Mexico and Texas by 50 percent.26 This disparity by region is largely due to the way the 1938 Rio Grande Compact artificially and unevenly distributes water between the states. "These declines are Reclamation’s worst modeled flow outcomes from climate change in the entire United States."27