To demonstrate the potential water savings of transferring storage to upstream reservoirs, we conducted an analysis of the monthly storage and evaporation during two years over the past decade, representing average and dry conditions. Appendix A contains a detailed look at the method used in this analysis and the alternatives selected. We chose the year 2010 (April 1 forecast was 102 percent of average) to show a year where average conditions of water availability and storage existed. By contrast, 2013 (April 1 forecast was 23 percent of average) was selected to show water availability and storage conditions in a dry year. 2013 is the driest year on record since the drought of the 1950s and 1960s.

We understand that this analysis is simplistic and that a more comprehensive analysis is needed to explore a full range of alternatives. A future study (conducted by a third party that does not have a stake in the outcome of the effort) that models evaporation and carriage losses associated with different storage and release scenarios is essential to explore all opportunities for water savings and environmental benefits. We, however, provide this investigation as a snapshot of what moving low-elevation storage upstream could produce in water savings and environmental benefits to incentivize further commitment and funding to undertake this more comprehensive study.

Section A identifies the water savings and quantifies the benefits of reallocating that water back to the river to support peak and perennial flows.

Moving the low-elevation storage of Elephant Butte and Caballo reservoirs upstream in a wholesale fashion would save nearly 100,000 acre-feet of water (96,164 acre-feet) from evaporating.

In 2010, the estimated evaporation loss from the six Rio Grande reservoirs (Heron, El Vado, Abiquiu, Cochiti, Elephant Butte, and Caballo) was calculated at 157,406 acre-feet. Most of that evaporation (73 percent or 113,874 acre-feet) was the result of storing water in the low-elevation reservoirs of Elephant Butte and Caballo. Moving the low-elevation storage upstream in a wholesale fashion—as shown in scenario 1 (Figure 13)—would save nearly 100,000 acre-feet of water (96,164 acre-feet) from evaporating.

While scenario 1 seems attractive based on its result, the scenario would not practically accommodate the delivery of Rio Grande Project water to downstream users and could threaten New Mexico’s ability to meet its delivery obligation to Texas under the Rio Grande Compact. This alternative simply shows that significant water savings can be achieved by moving storage upstream and sets the upper limit of such savings based on the existing conditions.

A more practical alternative (of which there could be many iterations) involves ensuring at least some minimal necessary storage in Elephant Butte Reservoir or Caballo Reservoir to ensure downstream deliveries. The second alternative developed does just that. Scenario 2 (Figure 13) assumes that all low-elevation storage will be kept in high-altitude reservoirs, except to require a 100,000 acre-foot pool remain in Elephant Butte Reservoir each month. Elephant Butte was chosen as the storage location based on the lower evaporative losses of that water compared with storing it in Caballo Reservoir.

Storage scenario 2 reduces the overall savings identified in scenario 1 by 10,000 acre-feet, but still conserves 84,473 acre-feet of water that would have otherwise evaporated.

Figure 13. Possible scenarios based on 2010 data for redistributing reservoir storage on the Rio Grande. 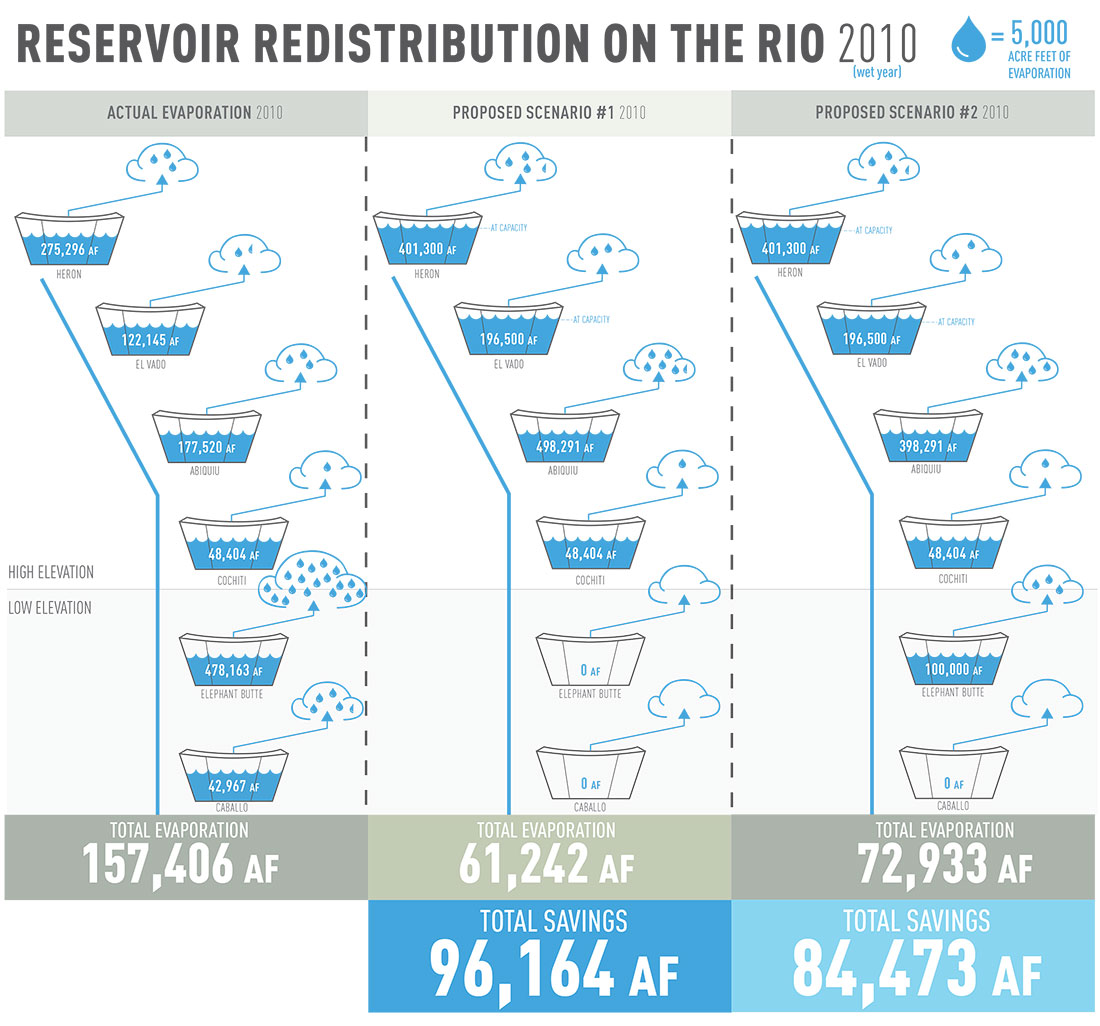 In 2013, the total evaporation estimated from the six Rio Grande reservoirs (Heron, El Vado, Abiquiu, Cochiti, Elephant Butte, and Caballo) was calculated at 93,934 acre-feet. Sixty-five percent of the water that evaporated (61,172 acre-feet) was the result of storage in low-elevation reservoirs.

As shown in scenario 1 (Figure 14), the wholesale relocation of the low-elevation storage upstream would save over 50,000 acre-feet of water (55,619 acre-feet) from evaporating. While this option does not provide a practical solution for delivery to downstream users, it sets the maximum of attainable savings under the conditions.

Scenario 2 (Figure 14) was developed to move a significant portion of the low-elevation storage upstream, but still provide for 50,000 acre-feet of storage in Elephant Butte Reservoir to meet deliveries downstream. Storage scenario 2 still realizes a water savings of 38,401 acre-feet.

While evaporation in dry years is much less than in wet or average years (when reservoirs are typically full), dry years are when water savings and retiming of deliveries could help make up shortages in the system and provide environmental benefits to already critically stressed ecosystems.

Figure 14. Possible scenarios based on 2013 data for redistributing reservoir storage on the Rio Grande. 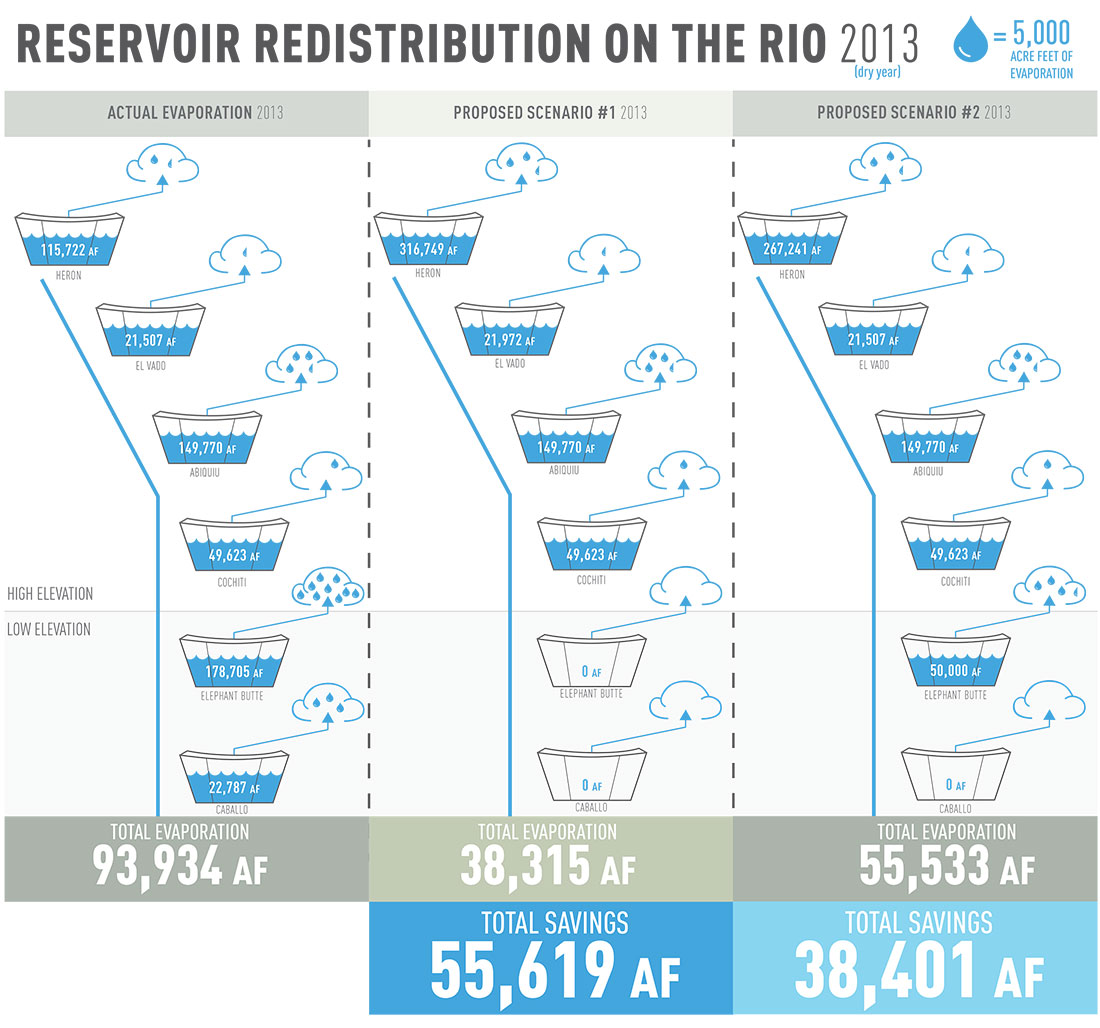 The imperiled Rio Grande could benefit significantly from relocating storage upstream and the associated water savings that would result. In addition, these changes in storage and re-timing of releases of water in the Basin may create additional efficiencies and benefits for water users, communities, groundwater storage, fish and wildlife, and the Bosque, among other interests. Possible benefits include:

In order to ground these general benefits in specific examples, we provide two instances of how to utilize the upstream storage and associated water savings in 2010 and 2013 to combat two perpetual environmental problems facing the Rio Grande: the annual river drying and the inability to create a spring peak flow. The following map (Figure 15) shows the extent of river drying from Cochiti Dam to Elephant Butte Reservoir in 2010 compared to 2013.

Figure 15. Extent of Rio Grande drying from Albuquerque to Elephant Butte Reservoir in 2010 and 2013. 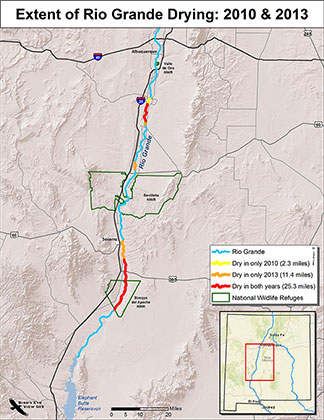 First, as mentioned earlier, river drying in the Rio Grande in central New Mexico is a continual problem based on the high demand and limited supply of water available each year. Even in an average year—such as 2010 where there appears to be a good deal of water based on river flows and storage—28 miles of the river dried (8.5 miles in the Isleta reach, south of Albuquerque, and 19.7 miles in the San Acacia reach, between Socorro and the south boundary of Bosque del Apache National Wildlife Refuge). This is only 10 miles short of the drying during 2013, one of the driest years on record.

The change in operations necessitated by storing Rio Grande Project water in upstream reservoirs may help alleviate this problem. Under the proposed scenario 2 (Figure 13), it is assumed that to meet downstream obligations water must be released from high-elevation reservoirs and carried downstream to maintain the 100,000 acre-feet of storage in Elephant Butte as its contents are evacuated to downstream users.

This release of water downstream would serve the dual purpose of water delivery and creation of environmental flows in hundreds of miles of the Rio Chama and Rio Grande from the location of the upstream storage (in Heron, El Vado, or Abiquiu reservoir) to Elephant Butte Reservoir. The depletions that will certainly occur as some of this water evaporates and seeps into the channel while flowing downstream could be offset by a portion of the 85,000 acre-feet of water savings created by implementation of this alternative storage scenario. 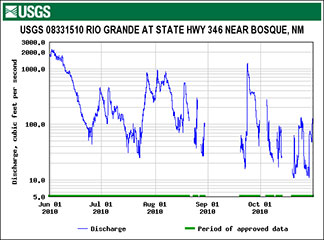 If these deliveries of Rio Grande Project water are still not sufficient to alleviate the drying in the river, a portion of the water saved could be intentionally released downstream at certain times of the year to ensure the river remains connected and that flows are sufficient to support the health of fish, wildlife, and plants in and along the river. For example, if 40,000 of the 85,000 acre-feet were dedicated to maintaining river flows during four summer months and released continuously over that period, an additional flow of about 150 cubic feet per second (cfs) could be maintained in the river on top of the existing base flow. In 2010, such additional flow would have been enough to ensure that the dwindling river flows at Bosque, NM (hovering below 100 cfs) in the Isleta Reach (Figure 16) would be bolstered above this critical level and reach a more stable flow of around 250 cfs.

Second, in dry years like 2013, it is difficult to generate a spring peak in the hydrograph (as typically occurred historically) due to the demands placed upon the limited supply of water in the Rio Grande. The lack of spring peak flow in 2013 is apparent when comparing the hydrographs from 2010 and 2013. 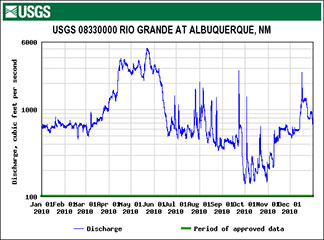 In 2013, instead of flows increasing in April, May, and June, creating a significant dynamic rise in the hydrograph, the river’s flows remained low and steady. Such conditions fail to transport sediment downstream, cue spawning in native fish, or create aquatic or riparian habitat for fish, wildlife, and nesting migratory birds.

Storing more water upstream provides the opportunity to move storage at opportune times ecologically to generate conditions that might not otherwise be possible. For example, based on the alternate storage scenario 2, storing more water upstream from January to May would save an estimated 18,000 acre-feet of water. In addition to that water, there is at least an additional 100,000 acre-feet of Rio Grande Project storage upstream that could be transported downstream. The timing of such a large-scale release of water would provide deliveries to downstream water users as well as create a critically timed environmental benefit. 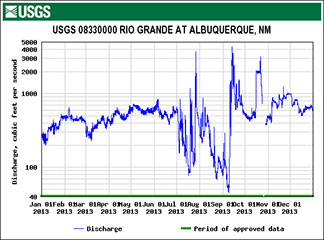 If 118,000 acre-feet of water were released over a 20-day period in late May, that water would provide an additional flow of 2,974 acre-feet to whatever base flows already exist in the river. It appears that based on the 350 cfs already in the Rio Grande around that time, a peak flow of 3,300 cfs could be achieved. Due to the channel capacity limitation on the Rio Chama of 1,800 cfs, other integrated reservoir management tools—such as the temporary detention of water in Cochiti Reservoir for a bulk release—may be necessary to achieve the greatest benefits possible. This generated peak flow would only be possible in a year like 2013 given the opportunities afforded by storing more water upstream in any given year.